We understand your dog is an important part of your family. To ensure your furry family member is safe and happy, our dog trainers use Positive Reinforcement Training in both our Dog Training classes and our Dog Daycare.

The dog trainers at Raising Canine are CPDT-KA (Certified Professional Dog Trainers-Knowledge Assessed). Their certification is through the CCPDT (Certification Council for Professional Dog Trainers). Our dog trainers use Positive Reinforcement Training rather than physically and psychologically intimidating type methods. We strongly believe in rewarding dogs for wanted behaviour rather than correcting them for unwanted behaviour. This is the corner stone of Positive Reinforcement Training.

Also, our dog training classes are kept small so both dogs and owners receive individual attention for optimal learning capability.

Our dog daycare staff are experienced and adhere to Raising Canine’s comprehensive Policy and Process Manual. This manual focuses on high standards in Dog Managing and Handling; Cleaning; Customer Service; and Professional Conduct.

We have both indoor and outdoor areas which are used throughout the year.

For both our training or daycare services, we strive to ensure your dog’s emotional and physical well-being are taken care of.

“At Raising Canine, we treat all dogs, clients, and staff with uncompromising kindness, dignity and respect.” 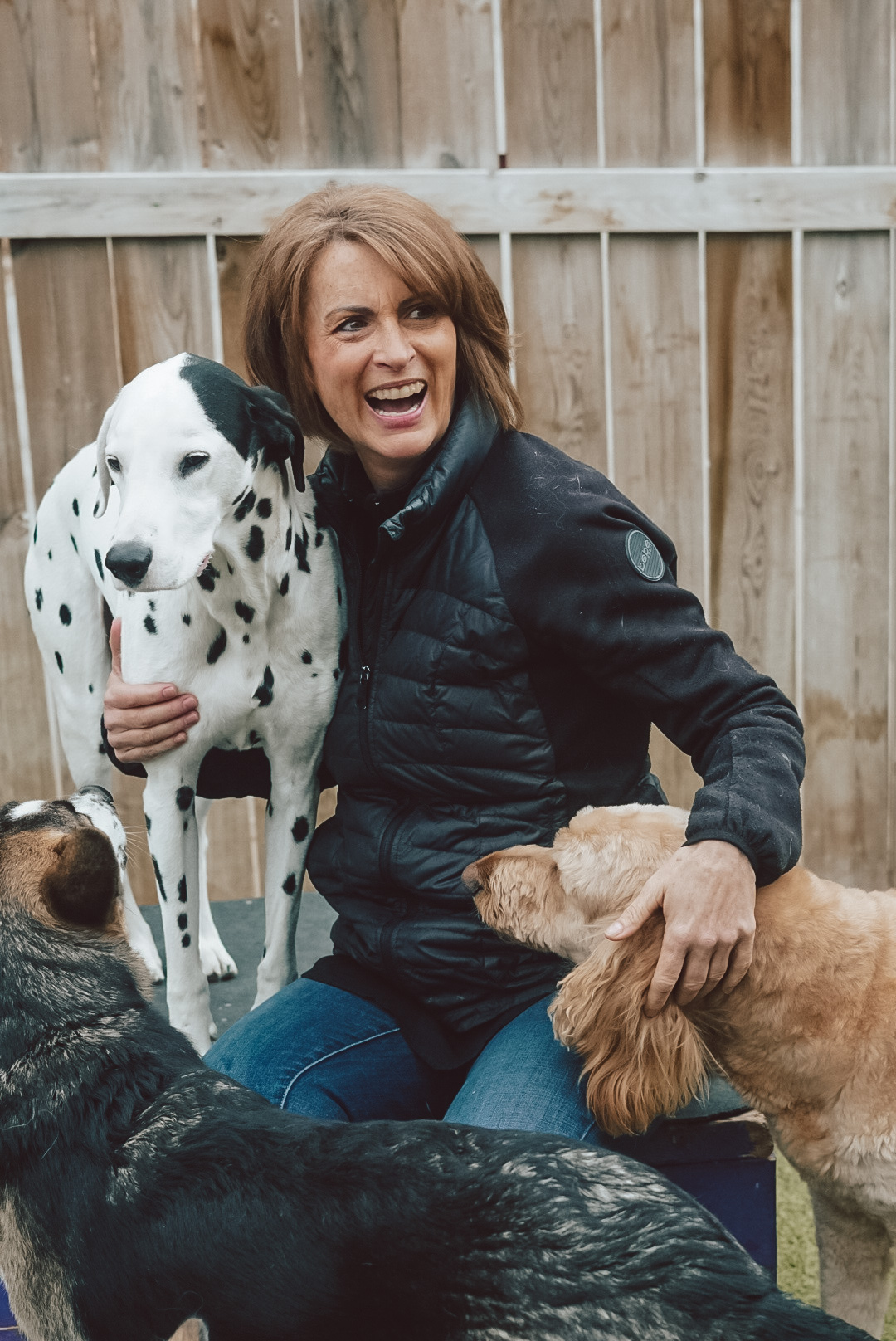 Velvetanne with Max and Charlie

The kind and caring treatment of all Raising Canine dogs is the steadfast philosophy of owner, Velvetanne, CPDT-KA. After 18 years as an Occupational Health Nurse, and 5 years working in Psychiatry before that, Velvetanne started questioning the aversive/corrective type dog training she was taught when she took her first Pomeranian puppy, Freezie, to puppy classes. Her challenging of this type of training continued two years later, with her second Pom puppy named Jamie. She finally realized that corrective type training was making both her dogs very fearful and stressed. Freezie eventually developed reactive behaviour such as growling and biting at people, and other dogs, when they tried to get too close to him.

Though research, Velvetanne discovered Positive Reinforcement Training, of which prompted her to take an accredited dog training program through PetSmart Canada. She loved this type of training so worked part-timer as one of their dog trainers. She loved training puppy classes, but also took a personal interest in helping other dogs with reactive behaviour as she did with Freezie. She then decided to branch out on her own to start Velvetanne’s Dog Training, offering both classes and private sessions.

Velvetanne believes that the treatment of dogs must be humane and ethical. She goes beyond only focusing on dogs’ behaviour while training them, but she advocates the need to include how dogs’ minds work in relation to their behaviour. She looks at how they ‘think, feel, and then choose behaviour’! With this, Velvetanne is able to appreciate the dog’s perspective, as well as, the humans’ perspective during training.

She finds that the most common question from her human clients is “How do I get my dog to be calm?”

She stresses in her teaching that dogs chose certain behaviours due to thinking and feeling that they are either ‘safe’ or ‘unsafe’. Especially when we bring puppies and dogs into our very busy and chaotic human world. When we better understand dogs’ minds, we can help prevent and treat their issues such as anxious, stressed, and/or over-excitable behaviour.

Velvetanne wants to educate and teach humans how to create a life that is mutually ‘Calm’ for both them and their dog.

From her dog training business, she also recognized that so many dogs were left at home, alone (often times in crates), for extended periods of time each day. This is due to several different reasons. Velvetanne recognized a need for a daycare so dogs can receive the emotional and physical outlet they require when their humans aren’t able to provide this.

She also became interested in training dogs when she was researching techniques to help her own puppy Zeke. She discovered there are many different opinions, online, about how to train dogs. After trying varying methods, she chose Positive Reinforcement Training as she felt it was the most effective as well as humane and ethical way to treat dogs. This was and still is important to her to keep Zeke and all dogs emotionally healthy.

When she rescued Wick at 5 months of age, he already had some mental health issues such as separation anxiety, sensitivity to touch as well as sounds and other fear related issues. With the knowledge and experience she has obtained over the years, she successfully helped Wick to recover, who now lives a calm and peaceful life.

She has helped hundreds of dogs (and their guardians) by using Positive Reinforcement Training methods. Her long term goal is to reframe how people view dogs. She wants them to have a better understanding of how we, our dog’s guardians, can meet the emotional needs of our dogs, so they can live calmly with us. 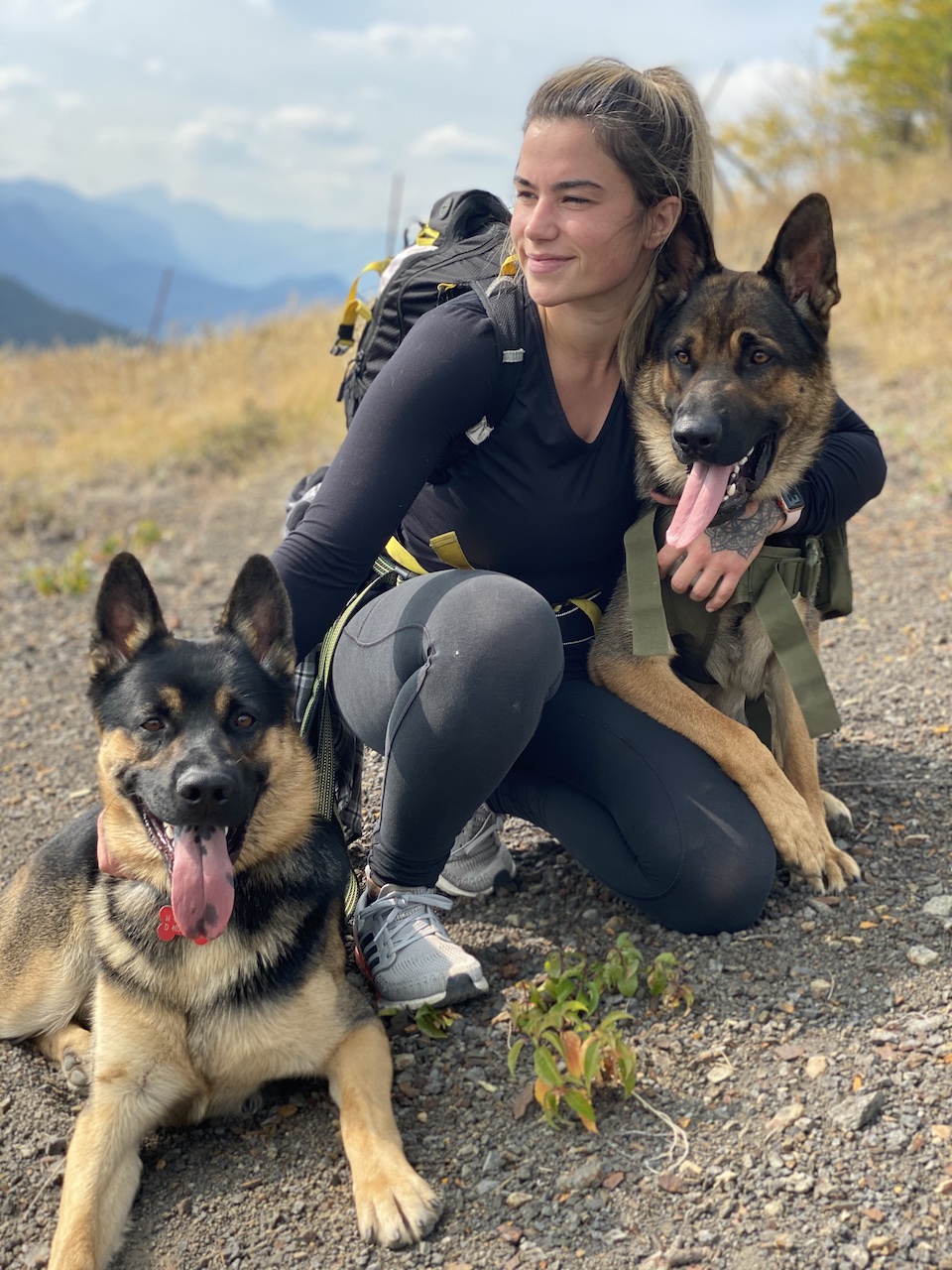 Justine with Zeke and Baxter